Ouarzazate (meaning ‘without price’ or ‘city of serenity’) is a city in the region ‘Souss-Massa-Drâa’, at an elevation of 1,160 metres in the middle of a bare plateau, south of the High Atlas Mountains. It is also named the ‘door of the desert’ as it is the gate of the Sahara, the starting point of the circuit of the ‘oases’ of southern Morocco’, and as a base for excursions across the ‘Draa Valley’.

Ouarzazate was first a small crossing point for African traders on their way to northern Morocco and Europe, and was a trading centre for camel caravans from sub-Saharan Africa on their way to Fez or Marrakech. During the French period, Ouarzazate expanded considerably as a garrison town, administrative centre, and customs post. Nowadays, Ouarzazate is an important tourist place, due to its natural diversity and the richness of its original architectural heritage.

The area of Ouarzazate contains rich sites and engravings dating back more than 4,000 years. This city and its environs, extending along the river ‘Dera’a wadi’, are rich in original architectural heritage dating back thousands of years. The area of Ouarzazate, on its own, has some 300 Kasbahs – nearly a third of the Kasbahs listed in the Moroccan Kingdom. Ouarzazate is best known for two magnificent Kasbahs ‘Taourirt’ and ‘Tifoultout’. 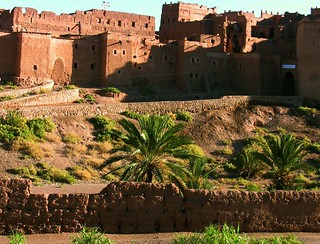 The ‘Taourirt’ Kasbah, located in the heart of the Ouarzazate, is one of the most beautiful in Morocco and is the symbol of city. Its construction dates from the 17th century. It is made of earth, straw and lime and weakens with time. It is listed as a national heritage monument and has also attracted the attention of UNESCO, which has carefully restored small sections of the inner sanctum. It was once the home and stronghold of the ‘Pasha Glaoui’, chief of a fearless Berber tribe. Afterwards, it was the residence of ‘Al Tuhami Glaoui’ (Lord of the Atlas). He lived there with his family until 1956. Since then, the kasbah was bought by the city of Ouarzazate and is partly renovated and now houses exhibition galleries, a library, and an amphitheatre. 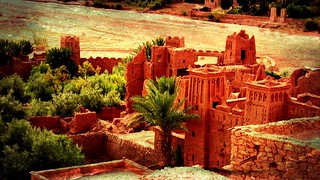 The most oldest and impressive fortress village of Morocco is the ‘Aït Ben Haddou’ which lies about 30 kilometre west from Ouarzazate (overlooking the ‘Ounila Valley’) and is since 1987 listed as a UNESCO World Heritage Site. Unfortunately, many of these ‘architectural jewels’ are threatened by ruin. The cinematographic background of the region of Ouarzazate, with its magnificent landscapes, vast palm plantations, imposing and narrow gorges, radiant light, ideal climatic conditions, and impressive Kasbahs, has been the magnificent decor in many films. 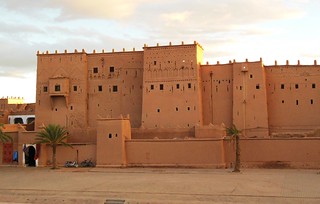 The ‘Tifoultout’ Kasbah was built in the 17th century to accommodate the ‘Pasha of Marrakech’s’ guests. This kasbah is 7 km away on the road to Marrakesh on a strategic rock outcropping, surrounded by palm trees with a great view over the city. Thought to be more than 300 years old, it was renovated about thirty-five years ago and has been converted into a hotel and a restaurant. It stands beside the village of Tifoultout, near the river ‘Oued Drâa’.

Ouarzazate contains three large studios and is on the way to becoming the first cinematographic pole of Africa. The ‘Atlas Studios’ were set up in 1983 and are open to the public. The area is also characterized by high quality carpet production. ‘Ouzguita’ is famous for its bright colours and beautiful geometrical patterns, the high quality henna with which women embellish their hair and hands. 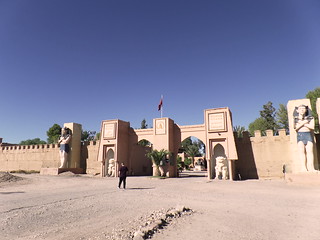 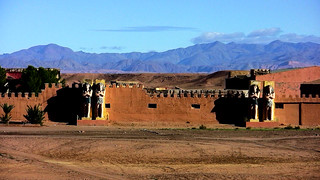 Ouarzazate is part of the tourism region ‘Atlas and Valleys‘ of Morocco.