A little north-east of the southern city of ‘Quarzazate’, lies the ‘Dadès Valley’, also known as ‘The valley of one thousand Kasbahs’. Traditionally, the people of this region lived in a large number of small Kasbah settlements. The most famous one is ‘Aït Benhaddou’, a fortified city (or ‘Ksar’) along the former caravan route between the Sahara and Marrakech. A ‘ksar’ is a group of earthen buildings surrounded by high walls (fortified village) and is a traditional pre-Saharan habitat, and is home to several families.

This giant fortification is made up of six Kasbahs and nearly fifty ‘ksars’ (which are individual Kasbahs). Most citizens in the area are now living in more modern dwellings in a nearby village, although there are still a few families living in the ancient city. Some people noticed that “the place nowadays looks more like a museum than someone’s home village”. ‘Aït Benhaddou’ is a great example of earthen clay architecture and has been listed on the UNESCO World Heritage Site since 1987.

The UNESCO status “had an immediate positive effect in restoration efforts and tourism promotion, which multiplied tourist flows”. This had also has a positive effect on the movie industry, the location was the decor of several major movies. In Morocco, there are much more impressive and famous Kasbah’s, such as Kelaat M’Gouna, El Khorbat, Telouet, Aït Ouzzine, Oudayas, Glaoui, Amzrou, Amridil, Tamnougalt, Tamdakht, Talmasla, and Taourirt. 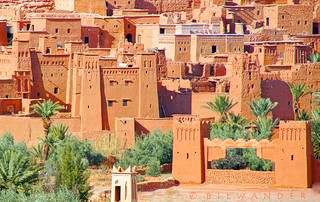 It is important to notice that this walled cultural heritage site is very different from the other UNESCO listed heritage Medina’s. This site is very popular by (foreign) tourists who make round-day trips, just to visit the site for a few hours. UNESCO pays for the restoration of the buildings’ outside walls to maintain the general look of the Ksar. The inhabitants are responsible for the restoration inside the buildings.

Ksar Ait Ben Haddou is part of the tourism region ‘Atlas and Valleys‘ of Morocco.