A Riad is a traditional Moroccan multi-story house or palace with an interior garden or courtyard, in Andalusian-style, that usually contained a fountain. Usually three to four stories high, each room opens onto the central open space of the riad. In Arabic the word ‘Riad’ means garden. 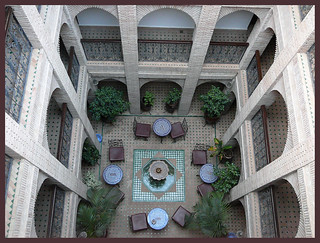 The Riads were inward focused, which allowed for family privacy and protection from the weather in Morocco. This inward focus was expressed with a centrally placed interior garden or courtyard, and the lack of large windows on the exterior walls of clay or mud brick. Rooms are generally built around a central courtyard, with windows overlooking the interior of the building versus the exterior. 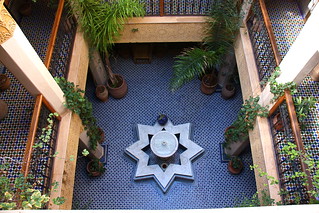 This design principle found support in Islamic notions of privacy, and hijab for women. Entrance to these houses encourages reflection because all of the rooms open into the central atrium space. The walls of the riads are adorned with tadelakt plaster and zellige tiles, usually with Arabic calligraphy of quotes from the Quran.

Riads were the stately city homes of the wealthiest citizens such as merchants and courtiers. The ancient Roman city of Volubilis provided a reference for the beginnings of Riad architecture construction during the Idrisid Dynasty. The style of these riads has changed over the years, but the basic form is still used in designs today. 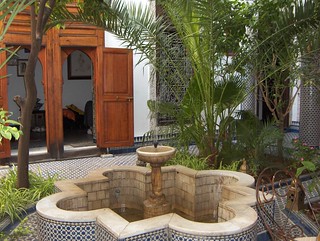 Recently there has been a surge in interest in this form of house with a wave of renovation in towns such as Marrakech and Essaouira, where many of these often-crumbling buildings have been restored to their former glory as hotels or restaurants. Many of the crumbling or ruined properties in Marrakech have been bought by foreigners. This foreign interest has brought new challenges but the investment has helped with the restoration of the UNESCO site and has helped revive many of the handcrafts and artisan trades that were gradually being lost before this trend. Many of the restored riads in the districts of Mouassine and Lakssour offer the finest examples of restoration as historically these areas contained many of the grand palaces from Marrakech’s Saadian period.

Riads are located throughout Morocco, but the ones in the Old Medina of Marrakech give visitors a true taste of medieval living. There are approximately 600 Riads in the red city of Marrakech available for vacation rental. Part of the appeal (and worry) of staying in a riad is actually finding it. Streets in the Old Medina were built as part of a fortress in ancient times, with narrow stone pathways that aren’t large enough to accommodate a car. To the untrained eye, most streets look identical, with tall earth-colored walls and little in the way of landmarks other than the occasional door. First time visitors should arrange to have a riad employee meet them either at the airport (about a 10-minute drive from the Old Medina) or a pre-arranged spot outside of the Medina so they can safely guide you to the riad. Arriving after dark without a map or guide is nearly a surefire way of getting lost.

A simple but tasty breakfast spread is commonly included with the price of a room at a riad. Pastries, fruit preserves, bread, canned fruit, and sugary mint tea are typical offerings. Few riads have full-service restaurants. Instead, guests are asked to let staff know the morning of if they’d like to dine at the hotel that evening, and the chef will purchase ingredients and prepare a dinner. The meal (usually a homemade tangine stew with spices, meat, and vegetables or cous cous) is often served on the riad’s roof under an Arabian-style tent, or in the inner courtyard.