Ionic rock archway collapses on to beach in Morocco

One of two archways regarded as natural wonders comes down at Legzira beach, leaving a pile of rubble on Atlantic coast. 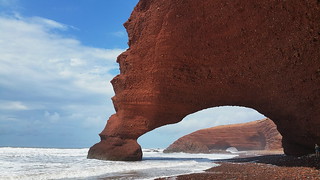 One of two rock archways at Legzira beach on Morocco’s Atlantic coast has collapsed. A pile of red rubble was all that was left after the natural wonder near the city of Sidi Ifni, 93 miles (150km) south of Agadir, came down on Friday afternoon September 23.

They were among Morocco’s best-known natural wonders: two immense rock archways towering over Legzira beach on the Atlantic coast. Often cited as one of the world’s most beautiful beaches, Legzira is famous for sunsets punctuated by the rock structures jutting out from the cliffs.  It took Mother Nature thousands of years (formed by erosion) to create the most recognizable Natural Arch at Legzira beach in Mirleft, a village on Morocco’s southern coast.

Hundreds of pictures of the collapsed rock were shared on social media with sometimes harsh criticism of the local authorities. Residents of Sidi Ifni would have warned them repeatedly for the growing number of cracks in the bow. It is however not exactly known what caused the collapse, but the movement of the sea could be a factor. A large crack appeared on the southern face of the arch in March after a chunk of it fell off, Ifnipress reported. The second, larger arch remains standing further along the beach.

It was regarded as one of the greatest beaches in the world, for example it reached the 29th place in 2014.

The loss of the arch may have an impact on Morocco’s tourism sector, which saw a fall in overseas visitors in the first half of 2016. Fears of terrorism and regional instability are thought to be to blame for a decline in tourists heading to the main destinations of Agadir and Marrakech.

We like to share this amazing documentary on the mythical city of Casablanca, but also on the COP22: from November 6 to 18, images that serve the strengthening and integration of the building in the environment for the city of Casablanca.