Chefchaouen (or ‘Chaouen’ or ‘shef-sha-wen’ or ‘Xaouen’), is a small medina situated at an altitude of 600 meter in the ‘er-Rif’ mountains (which is an active seismic region) in the north-western region of Morocco. The skyline of Chefchaouen nestles between two mountain tops of the ‘Jbel Kelaâ Ou Tissarka’ at an altitude of 2122 metres and is known as ‘Ech-Chaoua’ which means ‘the horns’ or ‘the horned mountain’. Chefchaouen can also be translated as ‘look at the horns (of a goat)’.

It was founded in 1471 by Cherif Sidi Moulay ‘Ali Ben Rachid’ and Moorish Jews exiles from Spain. He used the village as a base for guerrilla attacks on the Portuguese, who were expanding southward from their coastal city Ceuta. Later, ‘Moulay Rachid’ was assassinated by the Portuguese which made the construction of the medina unfinished. His cousin, ‘Abou Al-Hassan Ali Ibn Rachid’ finalized the construction of the citadel town in 1480 to the right bank of the river ‘Oued Fouarat’. Built in an Andalusian – Maghrebian architectural style, the medina is subdivided into a number of functional spaces and districts, specifically a trade quarter, a craft quarter, and residential blocks. The medina enclosed with ramparts contains 7 Babs (or gates) and 5 Quarters. It also includes a citadel (Kasbah) and a large mosque, characterized by its octagonal minaret. It has numerous monuments of great architectural and heritage value.

The historic ‘Andalusian’ village of Chefchaouen is characterised by its outstanding picturesque appearance. Chefchaouen’s houses are generally simple, but decorated with bright white, turquoise, teal and powder-blue walls, made by mixing lime and water with paint, and doors of bright or cobalt blue. This tradition stems from the town’s former Jewish population wishing to preserve their Andalusian heritage and said to ward off evil spirits. 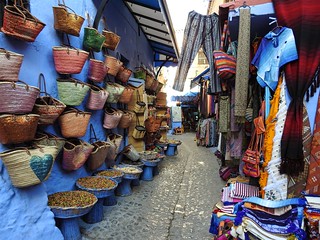 Chefchaouen today is a welcoming place, but it hasn’t always been this way. This region was once one of the most hostile towards Europeans. In 1920, the town was taken over by the Spanish as part their protectorate until independence in 1956. The hostility continued when Morocco was fighting the Spanish to avoid becoming a colony.

Modern Chefchouan has extended and the old town is now surrounded by a suburb. Chefchaouen is an important pilgrimage centre and is a popular shopping destination for many tourists, as the town offers some native handicrafts that cannot be found in most other places in Morocco. 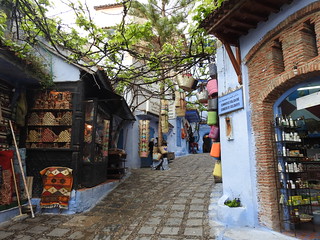 It is well known for its festival of ‘Andalusian’ music and its popular arts which serve to reinforce its role as a tourist town. 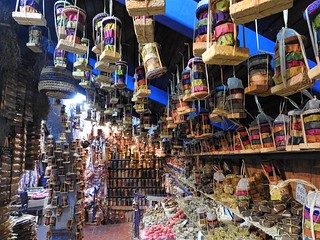 Chefchaouen is part of the tourism region ‘Cap Nord‘ of Morocco.