The Carthaginians took over the existing Phoenician settlements and expand them to other cities including Tamuda (near Tetuan), and at Ksar es-Seghir (Al-Qasr al-Saghir). The Carthaginian empire was, like the Phoenicians, more commercially oriented than territorial focused. Thus, Carthage never excised political control except along the coastal port cities.

Carthage’s political plan was thus: assimilate the sedentary people who lived in these colonial cities into society and try and push the nomadic people who dwelt nearby beyond the borders of the colonies. Because things didn’t go according to plan, three situations resulted. First was the chora, the nodal territories that Carthaginian land owners farmed by using Berber slaves which had been acquired by trade or conquest. The second situation was the dependent territories which were farmed by tax-paying Berber slaves, who often revolted against the Carthaginians. And third, there was the frontier, the independent territories where resistant nomads gathered, settled and began to imitate the Carthaginians ways in their farming, weapons, literacy, religious ideas, political ideas and making alliances with the imperial rivals.

In the Third Punic War, Carthage fell to the Romans. At that point the only place in the Maghreb (Morocco, Algeria, Tunisia) that was ruled directly by Rome was a 13,000 km2 plot of land in Tunisia. The rest of the Maghreb was in the hands of local rulers.

Over the next century, Roman settlers began to expand beyond the controlled land. These settlers carried with them Roman ideals and values, and began to lay a foundation for a direct extension of the Roman Empire into North Africa. By the reign of Claudius, major portions of the Maghreb were under Roman control, parts ruled from Roman Spain, parts from Roman Carthage.

For the first three centuries of the “New Africa” things were relatively peaceful. New Africa required one legion and a range of military forces to make for peace. Britain, at the same time, needed four legions. Roman troops spent much of their time managing nomads, not fighting them.

The Romans built 19,000 kilometers of roads in the Maghreb to facilitate the transfer of trade and for military purposes. Harbors were built and a shipping class was instituted. The Romans leased out large portions of land to private landowners, only requiring the payment of taxes in return. The local economies were booming and agriculture began to focus on the development of grapes for wine and olives for olive oil.

The main pre-Islamitic settlement of modern presence cities in Morocco are:

– Chellah (Rabat)
The existence of present-day Rabat has a long history, and dates back to the pre-Islamic period. It was founded by the Phoenicians, later these cities fell under Carthaginian rule; But their most prosperous period was under the  Roman Empire (44 – 250). Actually, the history started in 300 BC with a small settlement called ‘Chellah’, which was built on the banks of the ‘Bou Regreg’ river. During the Phoenician and Roman colony, the place was known as ‘Sala’ or ‘Sala Colonia’, whose ruins are still located in ‘Chella‘. The town of Salé was completed on the other side of the Bouregreg from this ancient Phoenician site. Salé dates from the Neolithic. 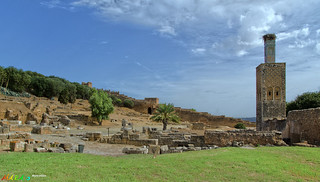 – Lixus (Larache)
North of the river Loukos, four to five kilometers outside of Larache, are the Roman remains of Lixus. It was settled by the Phoenicians in the 7th century BC. Lixus was part of a chain of Phoenician / Carthaginian settlements.

– Cerné / Migdal (Mogador / Essaouira)
The Phoenicians founded Cerné in 900 BC and it was then in the hands of the Carthaginians. But its true rise began in the 1st century BC under the reign of Juba II who changed his name to “Mogador”. Moreover, in the 6th century BC, the Phoenicians created a settlement on the Island of Mogador and they named it Migdal , Migdol (“watchtower”). The Phoenicians founded a dye (purple factory) on the island which later the Romans reestablished and it gave the name “the Purple Islands” ( Iles Purpuraires,ile de Mogador).

– Anfa (Casablanca)
The history of ‘Dar El Beida’ (‘Casablanca’ in Spanish) is very special because it goes back to the pre-historic times when it was known as ‘Anfa’.

– Asfi (Safi)
Safi (formally named ‘Asfi’ by the Carthaginians) is an ancient seaport town on the coast of the Atlantic Ocean . This coastal city is one of the oldest in Morocco and naturally has a rich history. Safi was inhabited by Carthaginians, Romans, Goths, and finally around the 11th century it became a Muslim city.

– Volubilis (Moulay Idriss)
The famous ruins of the ‘Phoenician’ and ‘Roman’ city ‘Volubilis’ are located just five kilometres away from the holy city ‘Moulay Idris (Zarhoun)’. This city is named after ‘Moulay Idriss I’, who arrived in 789, bringing with him the religion of Islam, and starting a new dynasty. He also initiated the construction of ‘Fez’, continued later by his son, ‘Moulay Idriss II’In the 3rd century BC, ‘Volubilis’ was developed as a ‘Phoenician’ (and later ‘Carthaginian’) settlement. It grew rapidly under Roman rule from the 1st century AD onwards and expanded to cover about 40 hectares (100 acres) with a 2.6 km circuit of walls. 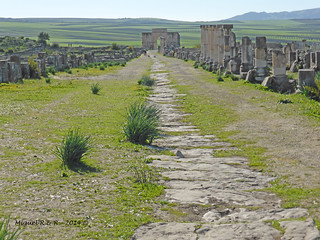 – Oppidum Novum (Ksar El-Kebir)
The station of Oppidum novum is generally placed at Ksar-el-Kébir, but this location is not absolutely certain. All that has been found in the town are two funerary inscriptions, one Greek, the other Latin, reused along with other Roman-looking ashlar blocks in building the Great Mosque, and a bronze statuette of a bacchante, which has since disappeared. However, there are quite a large number of Roman remains on the outskirts of the settlement, notably to the N and W. Moreover, the site has an extremely favorable strategic position at the crossing of the wadi Loukkos

– Tingis (Tanger)
Tingi (current Tangier in Morocco) was an important Roman-Berber colonia in the Maghreb. The Berber name “Tingi” was adapted by the Romans into Tingis, after which the province of Mauretania Tingitana was named. Tingis also served as its capital. The commercial Phoenician city of Thingis, came under Roman rule in the course of the 2nd century BC (146 BC). Later Tingi grew in importance first as a free city under Augustus, and then as a colony called Colonia Iulia Tingi under Claudius who made Tingis capital of Mauritania “Tingitana” of Hispania. Since then Tingis grew greatly in importance and in the fourth century it was the main Roman city of Mauretania Tingitana, bypassing Volubilis after that city remained south of the Roman limes and no more protected by the Roman legions. The city in those years enjoyed huge development and importance, reaching 20,000 inhabitants. Tingi was famous in the Roman empire because of the fishing conserve industry. Under Septimius Severus were built two Roman roads from Tingis: one on the Atlantic coast until Sala Colonia and the second in the mountainous interior toward Volubilis.

– Tamuda (Tetouan)
Tamuda was an ancient city near present-day Tetouan in northern Morocco. Stone ruins from the site are found by the south bank or Martil Valley. The ancient city was founded in the 3rd century BC by the Mauretanian Berbers of northern Morocco. Probably there was a Phoenician presence during the next century, mainly for commerce. Under the Emperor Augustus Romans occupied the city. Around 42 AD, Roman garrisons leveled Tamuda during an insurrection and in its stead erected a fortified settlement. The Emperor Augustus’ successors later rebuilt the city as a Roman castrum. Tamuda became later one of the major cities of the Roman province Mauretania Tingitana.

– Marnia (Oujda).
There are some indications of an early settlement during the Roman occupation at ‘Marnia’. Throughout the history, Oujda played an important role due its strategic location. Oujda was founded in 994 by ‘Ziri ibn Attia’ (a Berber king of the ‘Zenata’ tribes).

– Azama (Azemmour).
Azemmour, which means the ‘olive’ in Amazigh, is undoubtedly established on the ancient city of Azama, a city occupied by the Phoenicians before falling under the hands of the Carthaginians and the Romans. Under the latter, Azemmour experienced a period of prosperity.

– Rusbisis (El Jedida)
Rusbisis, founded by the Carthaginians in 650 BC, was then a Roman stopover on their way to Essaouira.

– Ich (near Figuig)
Ich was a Roman colonyRock carvings at Ich and its surroundings (Douissa, Chellala, Dchira, Oued Tachettouft) prove that the area was inhabited very early: according to the archaeologists these engravings date from the Neolithic era. Ich is one of the fourteen Moroccan cities founded by the Phoenicians, it was also a Roman colony and there are also pre-Islamic tumuluses.

– Thamusida (today Kénitra)
Founded by the Phoenicians, the present Kénitra at the mouth of the Sebou then experienced the Carthaginian and Roman invasions before falling into the hands of the Vandals and the Byzantines.

– Zilis (now known as Asilah)
Founded by the Phoenicians before Christ, it was later occupied by the Carthaginians from 700 to 146 before being under Roman rule under the name of Iulia Constantia Zilil.