Figuig (or ‘Ifiyey’) is one of the oldest cities in Morocco, and is located in eastern Morocco near the Atlas Mountains (at an elevation of 900 metres, in a basin of the seasonal ‘Zousfana’ river). It is on the border with Algeria and is part of the Oriental region. It is established around an oasis of date palms (called ‘Tazdayt’ meaning ‘palm tree’). This oasis area contains some hundreds of thousands of date palms and their fruit (called ‘tiyni’ meaning dates) has become Figuig’s most important economic resource. Other export products are pottery, goatskins, leather goods, and woollen ‘burnous’ (capes). 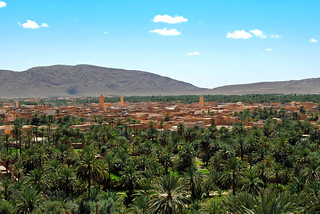 Figuig does not seem to have had much of a recorded history (Searight, 1999; Honner, 2012), except for the textual sources which are mainly constituted by travellers’ accounts: see Gillot and Del (2011) and Dominicis and Gianetti (2011) for some examples.

The area of Figuig has a long history. The ecological conditions of Figuig’s oasis shows, that it is not just a gateway but also a place to live. When the ‘Vandals’ conquered North Africa, between 429 and 636, the predominant religion in Figuig was Christianity. Since 645, the Muslims spread Islam to North-Africa, it was also the dawn of Islam in Figuig.

Since the 11th century, there were many conflicts between different dynasties to gain power over the city. In 1782, during one of the most violent confrontations between ‘Ksours’, the conflict finally ends. Water sources were generally the cause of conflicts. In 1881, the French tried unsuccessfully to crush the resistance Figuig who supported the Algerian resistance against the French.

As France takes control over Algeria in 1845, Figuig was still out of their reach. In 1904, Figuig is finally conquered by France and in 1912 becomes part of the French Protectorate of Morocco. Also the relationship with Algeria can be entitled as hostile. In 1963 (Sand War) and 1975, there were fighting between Moroccan and Algerian troops, which finally led to close the border between Morocco and Algeria in 1995. This has resulted in a further isolation and enclosing of the city. 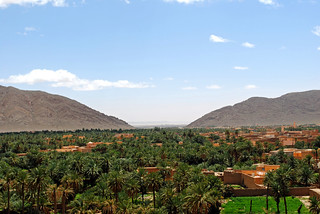 In comparison with other Moroccan walled cities, the medina of Figuig is rather special. Nowadays, Figuig is constituted by an urban nucleus composed of seven ancient ‘Aghrams’ or ‘Ksours’ (walled towns) with mud brick houses and some more recent districts. The traditional quarters of the ksour are roofed streets between window-less houses. Traditional, each village was an independent entity, and in case of conflicts, they also would fight each other. Every ksar possesses its own area of palm grove shared by families who exploit small plots of land surrounded with walls.

Figuig has gone true a significant process degradation caused by an important demographic exodus of their citizens and a drastic reduction of its resources (Madani, 2006; Dominicis, 2011). Also modernization has somewhat raised the standard of living, and drawn much of the town’s population away. The local authorities recognized this treat and started a program for a preparation to inscribe the oasis on the World Heritage List. “The oasis is regarded as a cultural landscape, composed by an important cultural heritage, both material and immaterial” (Gillot and Del, 2011). 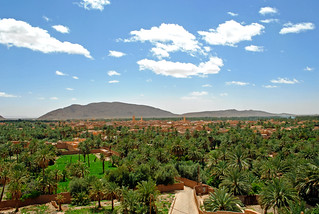 However, a political isolation has long kept Figuig out of the national development programs for actions to foster cultural heritage. Janty (2014) stated that “this isolation paradoxically allowed Figuig to preserve earthen architecture, a large palm grove, and cultural traditions from a rich past of caravan crossroads”. Figuig now seemed to balance to retain its cultural heritage, despite multiple interactions between (global) actors with each their own global logic and perspectives on cultural heritage (Dominicis and Gianetti, 2011). Janty (2014) defined this process as “an oasis in a situation of a ‘heritage bubble’ ”.

Figuig is part of the tourism region ‘Atlas and Valleys‘ of Morocco. 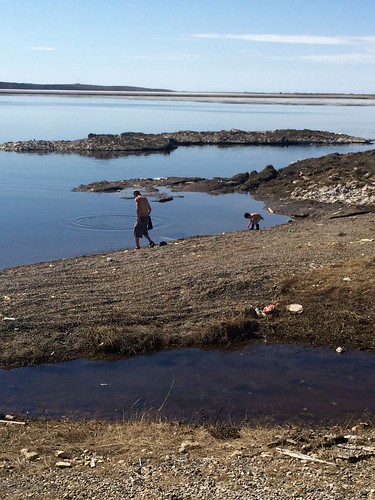